I know snow and rain is in the forecast for the weekend, but today, it’s spring here in Calgary!  The sun is dazzling and warm and the earth is finally thawing out.  There’s even some green grass in places….

I’ve been on crocus watch for awhile now – while the horticultural crocuses in my garden have been up and blooming for a couple of weeks now, I haven’t spotted hide nor hair of a wild one.  I went up to Nose Hill this morning, thinking that today was the day for sure.  I went to my favourite trails, the places I knew they were growing…and I found one where there used to be hundreds.  It may be too early yet, and perhaps they’ll be covering the hillsides next week or the week after, but I was overjoyed to see this one!

It froze hard this morning, and I loved the way the mounds of grass looked on the lower slopes where the sun hadn’t warmed them.

That’s part of the downtown skyline in the morning haze.  And here I was telling my parents last weekend that we don’t have smog – my brother is right, we actually do….

As you can see, there’s a sizeable snowpack still up in the mountains…and it’s got everyone just a bit worried about the potential for another massive flood like we had last year. On the right hand side of the photo, you can see the ski jumps of Canada Olympic Park, constructed for use during the 1988 Winter Olympics and now used as a public ski hill as well as a place to train athletes.  In the summer, COP is a haven for mountain bikers and zipline enthusiasts, and there’s even a luge track you can try out.  (Not me – I’m too chicken!).  The mini golf course there is much more my speed, LOL. 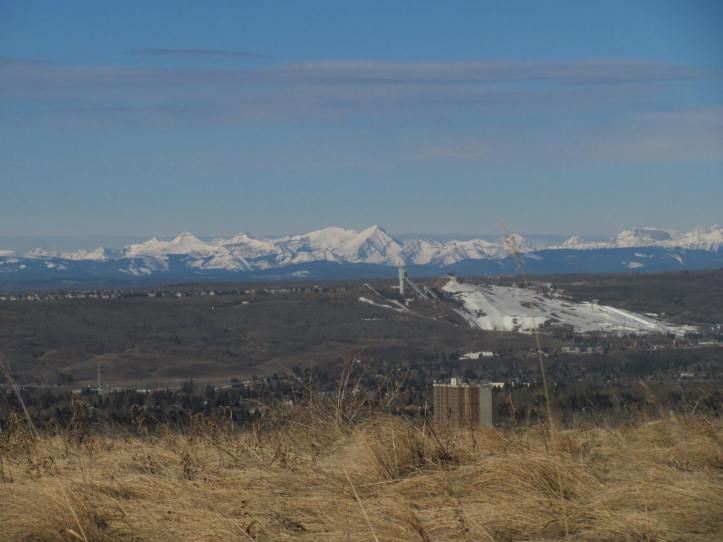 I came across several browses for deer and some others I suspect were from porcupines.  It was really a lean winter for wildlife – we didn’t get the Chinooks we usually do and so the heavy snow cover lingered all season.  Apparently that’s part of the reason so many homeowners are complaining about the vole damage to their lawns – the rodents were able to hunker down and feed and nest there all winter, when normally they would be exposed.  (Click here for some tips to repair vole damaged turf).

On my way out of the park, I was happy to see these two ducks swimming on the catchwater basin.  I was starting to think that little pond would never thaw out. 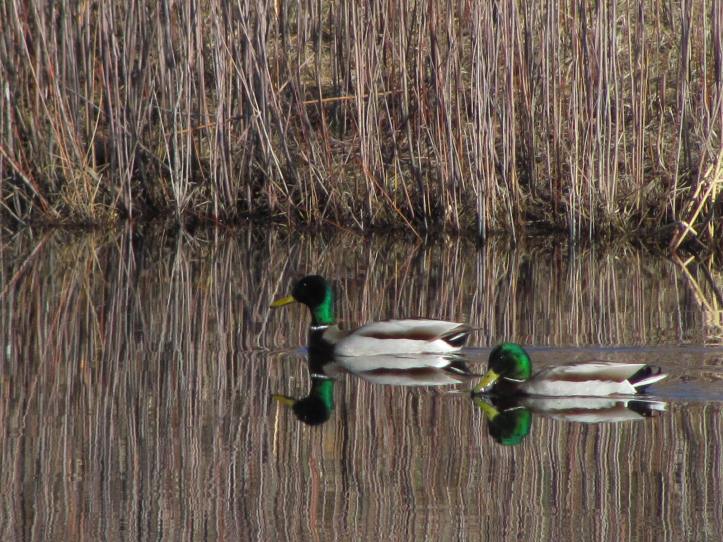 And then when I got home…there was a bee on my one of my muscari flowers, which just began opening this morning.  I definitely need to put in more early spring flowers for the pollinators.

What a wonderful start to the day!  I hope the sun is shining wherever you are!