Flowery Prose has sort of been languishing on the backburner for the better part of a year now as I’ve been tackling a zillion other projects…and while this has been going on, I’ve completely broken all the rules of good blogging.  Blogs that are worth their salt are built on the interactions between writer and reader. Although you’ve all been utterly fabulous and continued to read and comment whenever I’ve managed to squeak out a post (which has been less and less often as the months have gone by), I have, sadly, completely failed with regard to responding to all the fantastic comments I’ve received, as well as reciprocating by reading your blogs.  I not only need to issue a huge apology, but I need to take action.  So…effective immediately, you’re going to see a re-energized Flowery Prose.  I am also going to make a far greater effort to spend time finding out about what is going on in your part of the world, via your blog posts.  Please don’t expect huge strides, as I’m still swamped with projects.  But I am going to make a change.  Baby steps.  Thank you so much to all of you for sticking around this entire time, even when there was a whole lot of silence on my end – I am deeply grateful for your kindness!

It looks as if I will have to fire my research assistant…this is the fourth time today I have caught her sleeping on the job….  😉

The Central Library here in Calgary and the local writer’s group Loft 112 have a cool little thing going on…they’ve set up a Short Story Dispenser, conveniently located near Luke’s Café on Level 1M.  While you’re sipping your tea or coffee, you can indulge in a randomly-selected one-minute, three-minute, or five-minute short story that is released from the dispenser at the touch of a button.  The stories have been written by both international and Calgary-based writers – and I’m absolutely delighted to say that two of my five-minute stories are currently stuffed somewhere in the dispenser, waiting for someone to read them. If you live in Calgary and area, Loft 112 is still looking for more stories to fill the machine, so take a look at the call for submissions and have fun with it! 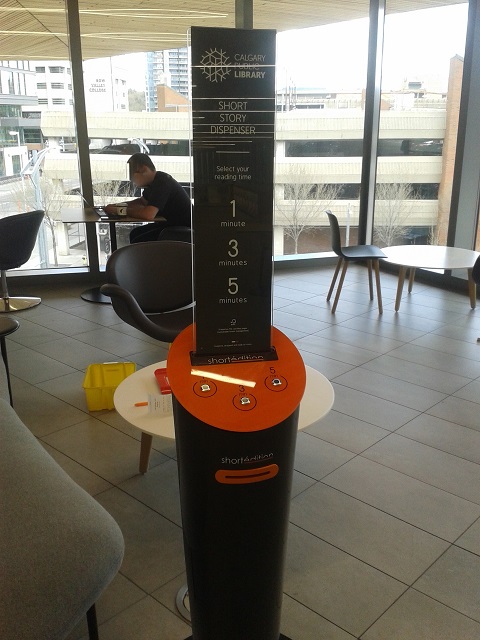 I recently found a little gem of a book by a southern Alberta-based writer, Joyce Moore: A Guide to Alberta Outdoors – Rides, Hikes, Birds, and Beasts (Bayeux Arts, Inc., Calgary, 2009). It’s a brief but lively collection of nature/outdoors columns that were syndicated for several rural newspapers in the 1990’s.  She writes about ranching in the Highwood River area, the undertaking of several challenging and stunningly beautiful mountain treks, and observations of birds and other wildlife found in the Rockies and the foothills.  A one-lunch-break read, and a fascinating look at our beautiful province by a woman who clearly loves and respects the environment.