Are you attending a Seedy Saturday this month?  Have you started any seedlings yet?  If you’re thinking about sowing seeds indoors this spring, then you’ve given some consideration to what type of seed starting medium you’re going to use.

I’ve been growing a lot of different microgreens lately and while I usually use a good quality commercial seed starting mix to sow my seeds in, I decided this week to make my own concoction of 1 part vermiculite, 1 part perlite, and 1 part coir.  There is no soil in this mix, which hopefully will reduce any instances of damping off – which actually hasn’t been a real problem so far, but I figure, why take chances?   Because I will be harvesting most of the greens right after they grow the cotyledons and two true leaves, I don’t need to worry too much about adding fertilizer (which is absent in my planting mix). 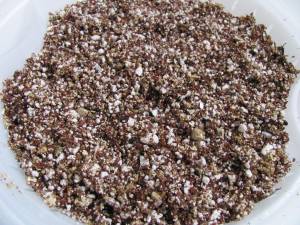 Peat moss may be substituted for coir in this mix, but as there are worldwide concerns about the sustainability of harvesting peat, I’m trying to get away from using it as much as possible.  Of course,  although coir is a very workable medium, it may not be the best alternative as far as carbon footprints are concerned – but at the moment, I haven’t been able to source out anything else.  (In their fantastic book No Guff Vegetable Gardening, Donna Balzer and Steven Biggs suggest that a ground bark-peat mix may be a viable option, but so far the only bark I’m seeing in garden centres here is for the purposes of mulching.  If anyone knows of a brand or a source, please give a shout out!).

I’m also contemplating growing my microgreens in lightweight expanded clay aggregate (LECA), which is often used in hydroponic systems.  I think it would be worth it to try some larger seeds in clay and see how they fare.   I’m also interested in growing seedlings in pumice, but that’s a project for a later date (and when I can actually find some horticultural grade pumice!).  I believe that orchid growers occasionally use pumice as a medium, although I think bark is more common.   As I haven’t yet killed the Phalaenopsis orchid my nephew gave me at Christmas (I know, I can’t believe it, either), I will eventually need something to transplant it into as well. 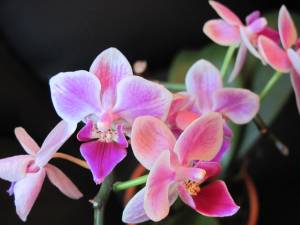 As an aside, while I was searching the ‘net for sources of pumice here in Calgary, I came across a few different bonsai grower forums in which they discuss the merits of growing their beautiful miniature trees in oil dry.  That’s right – you know the stuff you use to mop up the spills in the garage after you’ve performed an oil change on your car?  Yeah, that stuff.  I’m not sure you’d want to grow edibles in it, though…. 😉