Jicama: how to grow and cook it. 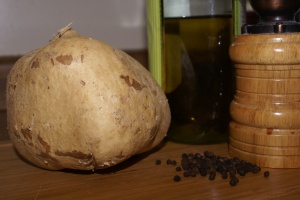 Another entry in my unofficial “unfamiliar tuber” series ;), Pachyrhizus erosus ‘Agua’ (jicama, also known as yam bean or Mexican turnip) graced my dinner plate for the first time last night.  Native to Mexico and Central and South America, and widely cultivated in the Philippines, Indonesia, China and southeast Asia, jicama is a member of the legume (Fabaceae) family and bears an edible root that looks sort of like a large brown turnip.  Peel the thick, dry skin away and you have a watery, starchy white vegetable that can be eaten raw or cooked.  The funny thing about jicama is that it keeps its crunchy texture no matter how it is prepared – it’s like water chestnuts that way.  It’s a bit on the sweet side, but I think you really need to marry it with other flavours to truly enjoy it – apparently in Mexico, it’s commonly served raw with chilies and a dash of lime juice.   I roasted mine in a little olive oil, with garlic, cracked pepper, and rosemary – yum!

As befitting a legume, jicama grows up to 5 metres long on twining vines, and can be trained to climb a trellis, or allowed to creep as a groundcover.  Blue or white flowers resemble those of peas, but to encourage the plants to direct energy to the production of roots, flowers must be pinched off.  (Bear in mind that all parts of jicama aside from the tubers are poisonous, so it’s necessary to wear gloves when deadheading.  The seeds actually contain a natural form of rotenone, a common pesticide ingredient).    Our northern Canadian climate isn’t warm enough to successfully grow jicama:  up to 9 months of sun, heat, and even moisture are required to produce decent-sized roots.  (“9 months of sun and heat” – sounds like the best tropical vacation EVER!).  Pachyrhizus erosus usually forms roots that weigh up to 2 kg; the ones you pick up at the grocery store normally hover around the half a kilogram mark.  (A record root weighing 23 kg was produced in 2010 in the Philippines by a related jicama species, Pachyrhizus tuberosus).

Give this refreshing taste of the tropics a go in your kitchen!