Botany word of the week.*

This is the retention of the dead and dry leaves (and sometimes other parts such as fruit or seed pods) on some deciduous trees through winter.  Persistence, or as I like to think of it: a relentless lingering, somewhat along the lines of my cat’s queries for elevenses, twelveses, oneses, twoses (you get the idea).  Some trees seem to exhibit marcesence as  a trait – oaks are apparently one of them, although our climate isn’t mild enough for most Quercus spp. so I can’t perform a decent study on multiple varieties.  I did take a wander past the row of bur oaks (Q. macrocarpa) that grow near the train station in my neighbourhood, and while there were a few single leaves straggling on the branches, the trees were pretty much completely bare.  But we have to count that as an insufficiently representative sample (which, incidentally, also seems to be my cat’s views on the amount of food I give her). 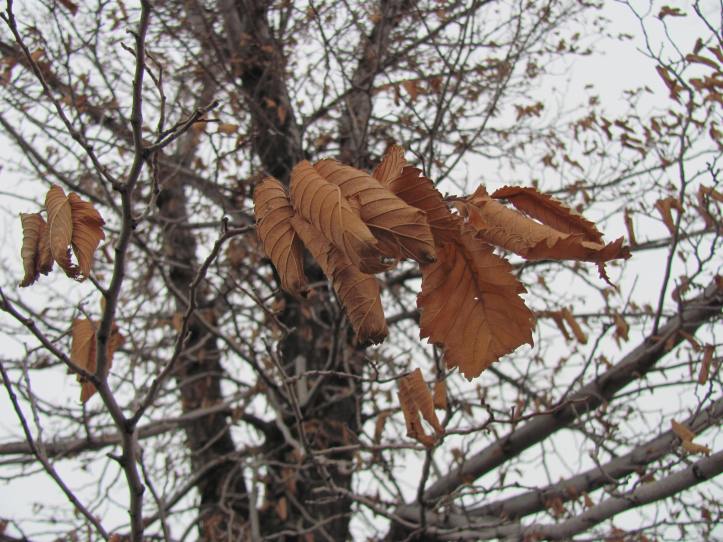 There are several theories on what causes marcescence, and what purpose it serves.  I believe in the case of this elm tree (and others like it in our city), the early frosts and severe cold we received back in September led to a failure of the formation of the abscission zone.  (This is an area of separation created by the natural weakening of cell walls between the petiole and the leaf.  While deciduous trees abscise in autumn, conifers do it pretty much all the time.  Another big difference is that deciduous trees normally fling everything off and conifers are, well, waaaaaaay more reserved). The leaves in my photo basically died on the spot and the tree wasn’t quite ready for that to happen. The wind took most of them off but some are still hanging around, waiting for spring like the rest of us.

Some researchers speculate that marcescence is a defense mechanism for the tree, protecting it from the munching of herbivorous predators such as moose and deer (who are going to eat fresh, tender young branch tips over icky dry foliage every time.  You can’t blame them, really).  Another idea is that the dry leaves act like little windproof shawls for the leaf buds, protecting them from winter desiccation.  Perhaps.  Still another thought is that the trees are deliberately generating their own mulch, dropping it at just the right time – spring, not autumn – for maximum moisture retention and as a source of nutrients.  Far-fetched?  Maybe, maybe not.

So what happens in the spring, when the buds of the new leaves break?  The marcescent leaves may remain on the tree, still waiting for a really strong wind to snap them off, or they may be pushed off the tree by the new growth, in which case they are instantly sucked up into a magical vortex so that you never have to rake them up.

Then again, there are never any guarantees when it comes to magic, so have that rake handy, just in case.

*To be completely truthful, I’m not sure which specific day of the week the Botany Word of the Week will be posted.  Or that it will actually be posted weekly.  It may kind of float around and periodically pop up and surprise you.  Hopefully that’s okay.