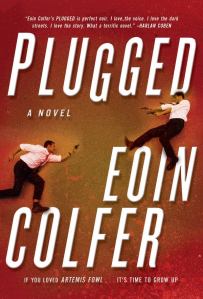 This over-the-top, darkly comedic and (at times) savagely raunchy novel from Eoin Colfer (yes, that’s the same guy that wrote the famous YA series, Artemis Fowl) is not for everyone.  If you can stomach it, however, it’s pretty fun and entertaining, even while you’re shaking your head in disbelief.  After his girlfriend is murdered, Daniel McEvoy, an Irish ex-military officer turned bouncer in a rundown New Jersey nightclub finds himself embroiled in a deadly plot involving plenty of drugs, dead bodies, weird sexual exploits…and hair transplants.  It’s as bizarre and unhinged as it sounds.  The voice of McEvoy is the best part of the book – first person narratives don’t always work, but this is a character who can be as self-deprecating, witty, and hilarious as he is tortured and complex.  I enjoyed that.  There is a sequel, Screwed, but I’m in no hurry to read it…too much of this kind of crazy could prove hard on the brain (and the digestive tract).

© Sheryl Normandeau and Flowery Prose, 2010-2019. Please don’t copy anything I’ve written or photographed without my consent. (Credited links are great, though). Thanks for respecting my work!