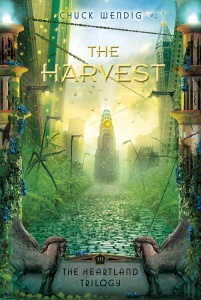 Broken, battered, and full of fury and fight, the gang’s (mostly) all here, as Cael McAvoy and his friends struggle to survive and marshal forces against their crushing Empyrean overlords in a twisted world driven by the commodity of genetically-engineered corn.  Complications plague them: divided loyalties and politics, love triangles (quadrangles? “Squares” doesn’t have quite the same ring), infection and mutation from the same strain of Blight that affects the corn crops, killer androids, and, oh yeah, a group of seriously frightening female assassins. As in Under the Empyrean Sky and Blightborn,  the other books in the trilogy, Wendig’s world-building is staggering in scope and crazy-inventive, and he doesn’t pull any stylistic punches…he shoves the reader from edge to edge and keeps the action dialed up quite a few notches above what you think you can possibly stand.  It’s a fantastic ride and a fitting finale to this dark, creative trilogy.

12 thoughts on “Book review: The Harvest by Chuck Wendig.”

© Sheryl Normandeau and Flowery Prose, 2010-2019. Please don’t copy anything I’ve written or photographed without my consent. (Credited links are great, though). Thanks for respecting my work!